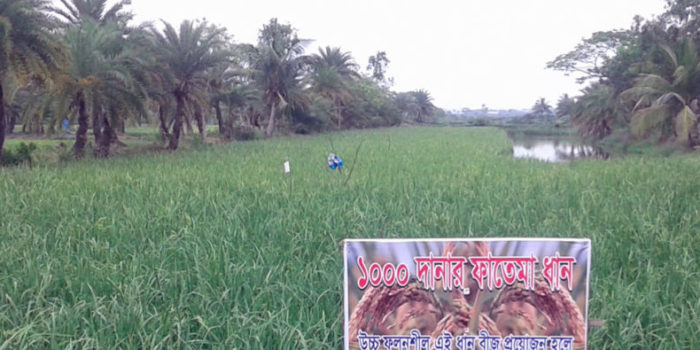 The incredible “Fatema Dhan”: Is it an open-pollinated farmer-friendly hybrid-mimic vaiety similar to or better than commercial hybrids
Abed Chaudhury, Plant Geneticist, Researcher on hybrid Rice

A new rice “variety” popularly known as “Fatema Dhan” or Fatema’s rice is taking Bangladesh’s southern area by storm. Similar to “HariDhan” it promises to find its place in the annals of folklore of Bangladesh, which often simply by oral tradition celebrates our creative farmer geneticists who have bred ad nurtured new varieties of crop. This is an apt example of “user-led innovation”, an area of innovation that still has not found its place in our collective consciousness in a way that justifies its significance. Bangladesh Press and social media has publicized the case of Fatema Dhan quite strongly during the last year just like it publicized the case of Haridhan a decade ago. It is the case of an observant farmer woman noticing a rice plant that looked more fecund from ones surrounding it, and then amplifying that different plant to the point that it was now distinct, uniform and pure; a presumptive new variety. Thousands of hectares of land are now allegedly growing this new variant and even expert agriculturists are scratching their head wondering what this variety could be.

It is important to analyse this “user-led” innovation carefully and it is important to reward the farmer-breeder who identified and developed this variety. She has already made her collected seed available to everyone and has no way of enforcing her right. It is important to keep a provision in our “Plant Varieties Act” such that new varieties could be attributed to the genius of inventors such as Fatema Bibi.

A decade ago I left CSIRO of Australia bolstered by my finding that a plant could perform as well or better than a hybrid. I wanted to do more of it in the soil of Bangladesh. This new thinking suggested that commercial hybrid rice mainly coming from China and containing a huge gene-pool of high performing rice could be hybridized with our traditional varieties to develop rice that would be hybrid-like in many aspects except that seed can now be saved by our farmers generation after generation. We developed many such varieties and made them available to the people of Bangladesh via BADC as well as through then then Minister of Agriculture Begum Matia Chowdhury. We did all this via farmer assisted breeding though the data showing high performance of our varieties have not yet been made public. It is my suggestion that Fatema Dhan is also a result of hybridization between a commercial hybrid and a local variety or even inadvertent crossing of two hybrids. Rice, though self pollinating, can and will cross in the field, creating new genotype. This has been the method of creation of new varieties snce time immemorial.

In the new era of genomics , epigenomics and phenomics being analysed by deep learning and artificial intelligence it is only a matter of months to decipher what Fatema Dhan is, provided adequate resources are made available. I am excited by Fatema Dhan just like I was excited by HariDhan a decade ago. Excited because an act of creativity by a traditional farmer has put us near the cutting edge of Plant Biology. I recall in fornd memory how a group of young workers led by Munir Hasan collaborated with me in 2008 onwards in the collection and analyses of Haridhan and how a Ph.D was awarded to Rokeya Begum of DU because of the analyses and publication of the partial genomic analyses of Haridhan. It was demonstrated that Haridhan was derived from BR11 as a result of two successive events of hybridization, creating an up-regulation in a growth=promoting gene, a work performed by Professor Zeba and her student Rokeya Begum.

Similarly Fatema Dhan can now be analysed. But now thinking on molecular mechanism of heterosis has changed. A particular target should be the epigenome of Fatema Dhan. It is important to know after interviewing the farmer-inventor Fatema what were the presumptive parents whose cross created Fatema Dhan. Highly fecund hybrids from Dr. LongPing, sold by Aftab seeds are obvious candidates to consider as has been my experience as the LP hybrids contain in them huge degree of heterosis. Whole genome sequencing and analyses of growth regulatory genes should follow as well as analyses of the genone and epigenome with “deep learning” tool such as DeepVariant which has now been made available by Google and which now makes data of next generation sequencing so much easier

Extreme high yield in a variety is likely to occur by the recruitment of hybrid vigour or heterosis. I have seen this in the rice fields of Kanihati for the lest ten years along with my co-workers and participating farmers. Like Fatema Dhan our varieties have been made available to farmers of Bangladesh and the government of Bangladesh. We hope that such varieties more than 100 in number will play a role in food security of a climate challenged world. Crossing in the field followed by the discovery of high yielding progeny by farmer-breeders is an important but less acknowledged example of informal plant breeding and varietal improvement in rice as well as other crops. Such “User-led innovation” often creating hybrif-mimics should be given explicit recognition by relevant authorities in Bangladesh.