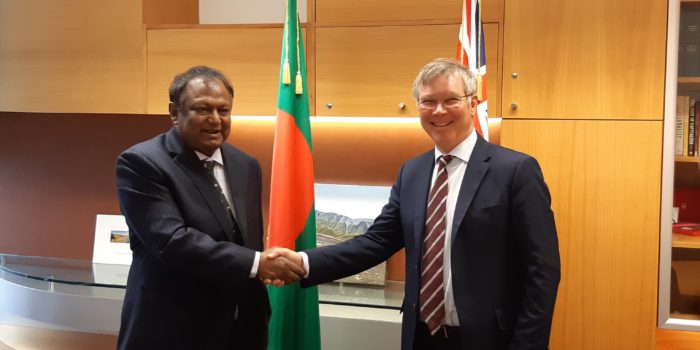 Bangladesh Commerce Minister Tipu Munshi and New Zealand Trade and Export Growth Minister David Parker has agreed to work closely to facilitate trade and economic interactions between the two countries at a bilateral meeting held at the Parliament House of Wellington on 18 November.

Tipu Munshi’s visit marked the first ever visit by a Bangladesh Commerce Minister to New Zealand since Bangladesh’s independence. During the meeting, the two Ministers acknowledged the absence of diversification of products and noted the imperative for a trade framework that is critical for intensifying trade interactions. Minister Tipu Munshi invited New Zealand to invest in Bangladesh given the incentives extended to the foreign investors and the prospect of accessing huge market in the neighbouring economies.

The two Ministers has agreed that forming a government-led framework would provide a unique platform to examine prospects and challenges at sectoral level and opportunities to bring newer items in the trade basket that would benefit both economies and people.

The Commerce Minister also met the CEO of the Auckland Business Chamber Michael Barnett in Auckland and discussed how to create links between the SMEs of the two countries to facilitate business among themselves. They further spoke about direct linkage between relevant chambers and associations of the two countries to speed up business interactions and investment. The Commerce Minister invited the CEO to visit Bangladesh with a business delegation to explore the opportunities.

Tipu Munshi also attended a dinner hosted by Bangladesh High Commissioner Sufiur Rahman in the evening on 18 November. Before the dinner, a video on Bangladesh’s impressive development trajectory was played that followed a presentation by the High Commissioner on the recent achievements and successes of Bangladesh and the opportunities exist for foreign investors.  The dinner was attended among others by the key government representatives from the Auckland branch of the Ministry of Foreign Affairs and Tarde (MFAT) and businesses that have interest in Bangladesh such as Fonterra, Auckland Bio Sciences, HamiltonJet, Rishworth Aviation, AW Fraser and Daifuku BCS.